Time to Move to Geothermal?

As many building owners and managers know, the cost of heating and cooling their buildings is often their highest expense. In fact, buildings account for 40% of all energy consumption in the United States, the majority of that from heating and cooling. Many existing HVAC systems are outdated and inefficient, and the cost to run them is directly correlated with the current cost of the fossil fuel that is used to operate it. 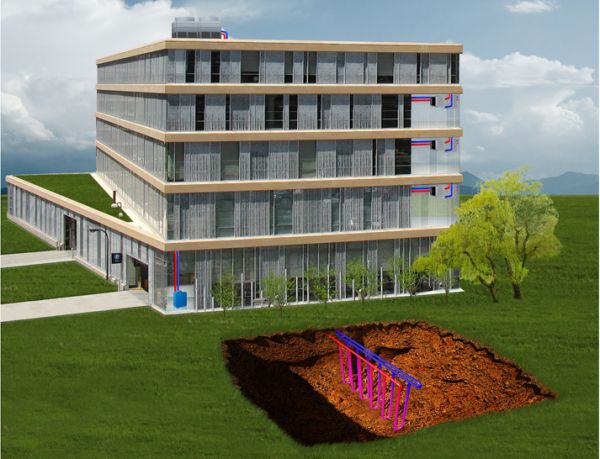 LEED, or Leadership in Energy and Environmental Design, is a rating program for green buildings. It was created by the United States Green Building Council (USGBC) to evaluate the environmental performance of a building, and to give guidelines to follow to create a building that is highly energy efficient, healthy, and money-saving. It is the most widely used and respected green building rating system in the world. LEED-certified builders and contractors follow the strict guidelines established by the USGBC. New commercial construction is leading the charge in following LEED guidelines by increasingly installing geothermal HVAC systems that result in creating spaces that are not only energy-efficient but a healthy environment for their occupants as well. Geothermal HVAC systems are the most efficient systems today and are growing in popularity. Using the heat of the Earth to heat your building sounds like it would be a complicated process, but it’s actually quite simple and consists of three parts. The ground loop is a series of pipes in a closed-loop water circuit that is buried beneath the ground’s surface near the building and used to exchange heat. Water passes through the pipes and absorbs heat from it. The heat is removed from the water through the heat pump, where it is concentrated and pushed back into the building through your delivery system to provide heat. The opposite happens in the summer for cooling a building when heat is removed from your building and released into the ground and groundwater. These heating/cooling systems can be water to water or water to air systems.

The cost of the above ground heat pumps is relatively inexpensive; the underground piping makes up the bulk of the cost of the system, but the amount of piping is adjusted to the size of the building in order to provide enough hot water for heating and hot water usage. They can be converted to be used with your current HVAC system and duct work quite easily, but if it is an older system, it may be time to invest in a newer, more efficient unit. While the heat pumps do require some electricity to operate, the cost is minor and is offset by the energy savings which is at least 5 times that of the electrical cost. The savings from a geothermal system can be significant. According to the EPA, a geothermal energy system is the most energy-efficient way to heat and cool a building and can save 30-60% over traditional HVAC systems.

Because the ground just a few feet beneath the Earth’s surface generally remains at a temperature of 55-75°, geothermal energy is a consistent source so the costs are predictable, as opposed to the costs associated with the frequent fluctuations of fossil fuels. This makes budgeting for heating and cooling costs easier, especially when facing cooler or warmer-than-normal periods. Although it’s essential to regularly maintain any mechanical system to keep it running smoothly, geothermal systems are typically cheaper to maintain than conventional systems and have a longer lifespan as well. 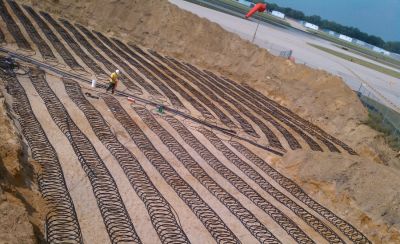 It’s always important to have an experienced, quality company install your geothermal system. At Jarrell, our team of engineers can provide a cost savings estimate for a geothermal HVAC system or retrofit for your building and design a system of the highest quality with the greatest value. We believe in optimum efficiency with designs customized to your building. A geothermal HVAC  installation from Jarrell will make your building greener and more energy efficient, saving you money.

Call Jarrell today to find out if a geothermal heating and cooling system is the best solution to your energy efficiency problems.